who is rich anyways

Congress and President Barack Obama are struggling with that question as they wrangle over how to avoid the “fiscal cliff.” If they can’t reach a decision, tax rates will increase sharply for most Americans—both rich and not—and draconian spending cuts of $110 billion will kick in. 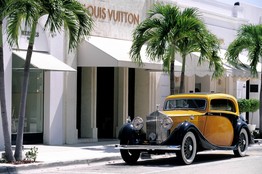 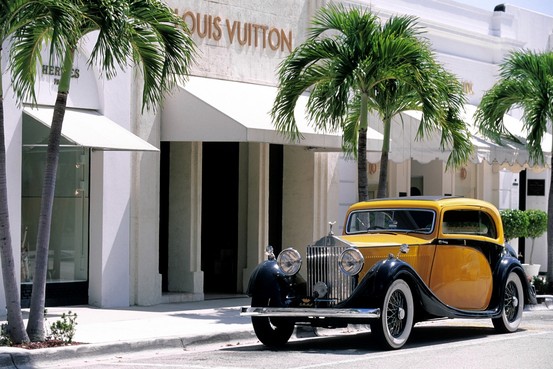 It isn’t as easy as you might think to determine who is rich. There are many different yardsticks devised by Uncle Sam, banks, brokerage firms and other institutions. The thresholds—as low as $44,000 for people receiving Social Security benefits—matter because they determine the taxes you owe, the college aid you receive, the investments you have access to and the fees you pay. 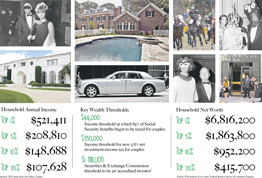 Needless to say, these national figures obscure large geographic differences. A prince of income in Danville, Va., is a relative pauper in New York City.

In Danville, the threshold for the top 1% of earners kicked in at $179,000, while it took $588,000 to reach the top 1% in New York City and northern New Jersey, according to an analysis by The Wall Street Journal of U.S. Census Bureau data from 2007 to 2009 collected by the University of Minnesota Population Center. 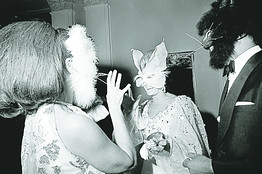 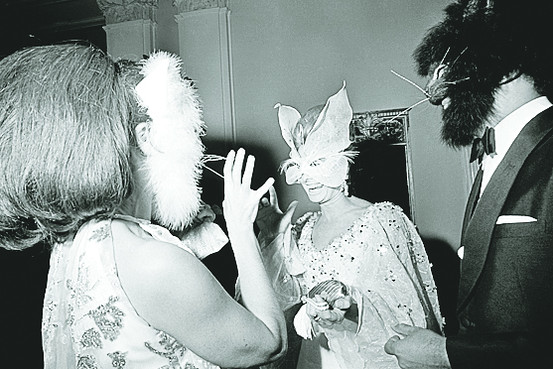 Then there are emotional measures of wealth. H.L. Mencken once quipped that wealth in America means making a little more money than your brother-in-law.

Samuel Johnson was just as shrewd, if less cynical. He wrote: “Every man is rich or poor according to the proportion between his desires and his enjoyments.” So if your wishes align with your purse, the amount of money in it doesn’t much matter.

It is up to the politicians to determine who is rich under 2013 income, capital-gains and estate-tax rules. Here are some important thresholds that won’t change next year—from lowest to highest—plus tips for making them work in your favor.

This is the threshold at which 85% of Social Security benefits begin to be taxed. It isn’t indexed for inflation. (At a lower level, 50% of benefits are taxed.) 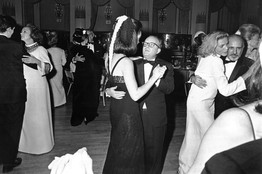 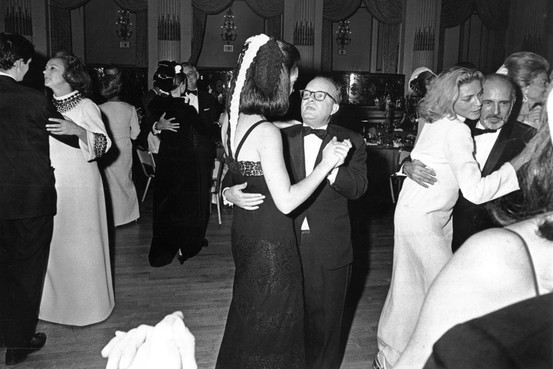 For most taxpayers, this threshold is computed by adding tax-free municipal-bond income plus half of Social Security benefits to adjusted gross income, or AGI. That’s right: Muni income won’t help avoid this tax.

What will help is tax-free income from a Roth individual retirement account, which doesn’t count in the calculation. In addition, owners of regular IRAs who are 70½ years or older and charitably minded can usually give up to $100,000 of donations directly from their account to charities and have it count as part of their required annual payout.

There is no tax deduction for those contributions, but neither is there income that swells AGI. This wildly popular provision lapsed at the beginning of 2012, but many believe Congress will restore it retroactively.

This is the level at which Medicare Part B outpatient-services and Part D drug-coverage premiums start to rise based on income for married joint filers.

For many Medicare recipients, the definition of income is similar to the one for determining tax on Social Security benefits: adjusted gross income plus tax-free municipal-bond income. Most 2012 premiums will be determined using information from 2010 tax returns. 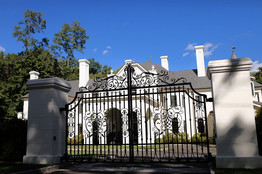 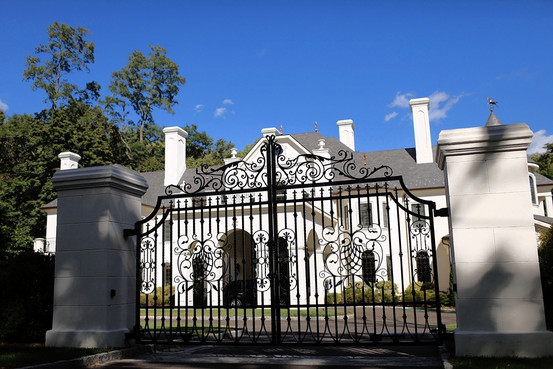 How can you lower your income? As with Social Security benefits, tax-free Roth IRA payouts don’t count as income, and people 70½ and older can help keep AGI down by making charitable donations directly from their IRA, assuming Congress renews this law.

This is the informal income threshold for need-based financial aid for undergraduates at many private colleges, says Mark Kantrowitz, the expert behind the financial-aid and scholarship resource websitesFinAid.org and Fastweb.com.

Besides income, the aid formula typically adds in 20% of the student’s assets per year and up to 5.64% of the family’s net assets (including 529 college-savings plans), but it excludes the value of retirement accounts.

A rude shock for many families is that the formula includes the value of parental retirement-plan contributions starting in January of the student’s junior year of high school, so it is a good idea to maximize those contributions until then.

There are many variables, according to Mr. Kantrowitz. Often the most important are unusual financial circumstances—such as volatile income or high medical expenses in one year—and the number of children in college at the same time. With two children at private colleges, for example, the income threshold could be as high as $250,000 or more.

But a school that denies need-based aid to a student also might give a “merit” scholarship to bolster geographic diversity, fill an undersubscribed department or activity, or maximize revenue.

“These days almost everybody struggles to pay for college, regardless of income level,” Mr. Kantrowitz says. “I have seen doctors living from paycheck to paycheck because of these costs.”

This is the threshold for the new 3.8% net investment income tax that kicks in on Jan. 1 to help finance the massive health-care changes. It applies to rents, royalties, net capital gains, interest and dividends, among other income. It doesn’t apply to tax-free municipal-bond income.

For most taxpayers, the threshold is adjusted gross income. This means taxpayers will want to reduce AGI as well as time the receipt of investment income when possible.

Charitable donations, mortgage interest and other itemized deductions don’t help with that, but pension and 401(k) contributions can. Tax-free muni-bond income and Roth IRA income won’t swell AGI, either.

This is the upper limit for a “conforming” mortgage for a single-family home in the contiguous 48 states and Puerto Rico. This limit is higher—$625,500—in Alaska, Guam, Hawaii, the U.S. Virgin Islands and certain high-cost markets, such as the New York metropolitan area, San Francisco and Los Angeles.

Conforming loans are mortgages that can be packaged and sold to government-sponsored buyers such as Fannie Mae FNMA -1.54% and Freddie Mac FMCC -3.91% . Home buyers who opt for private mortgages or “jumbo” loans on more expensive properties pay about 0.5 percentage point above the current average of 3.5% for a 30-year fixed-rate mortgage, says Keith Gumbinger of HSH.com, a mortgage-information website.

The best way to stay below the limit, he says, is simply to buy a cheaper house or put more money down up front. With Congress considering scaling back the mortgage-interest deduction, there are tax reasons to be prudent about home mortgages as well.

Net worth of $1 million, excluding the value of the primary residence, or $200,000 in income for the past two years are the main requirements for “accredited investor” status, as set by the Securities and Exchange Commission. This designation allows investors to put money into lightly regulated hedge funds or private offerings.

Those sums might not be sufficient, however. Some private offerings and hedge funds require investors to prove $5 million of net worth, and the median minimum for some investments is $1 million, according to eVestment, a research firm that tracks institutional money managers’ performance.

There can be ways around those minimums for accredited investors hungry to get into certain funds. Barclays BARC.LN -1.30% Wealth and Investment Management, for example, allows people with $5 million of investible assets to commit as little as $100,000 to $250,000 to funds normally requiring a $1 million minimum, says David Romhilt, head of manager research at the Barclays unit.

A common threshold defining “ultrahigh-net worth.” With variations, it is used by institutions such as Barclays, Merrill Lynch’s Private Banking & Investments Group and Morgan Stanley Wealth Management. Even retail giant Vanguard Group has a special category for “relationships with $10 million and more.”

What does this get you? Lower advisory fees, in many cases, and access to certain restricted investments. Also special treatment of large concentrated stock positions, such as hedges and collars, or attention to the execution of large trades.

Ask about nonfinancial services as well. Does the hand-holding extend to finding a caterer for your daughter’s wedding, or—in a pinch—walking your dog?

—Julie Steinberg contributed to this article.